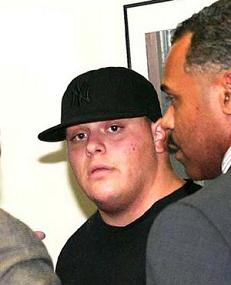 (It was only a matter of time)

And this to the "Battered Wife Defense," "The Ambien Made Me Do it Defense," and the "I was Molested by Circus Clowns Defense."

Now white people can call you a nigga, beat your ass and say that hip-hop made them do it.

Last June, Glenn Moore, a negro, got his skull fractured in Howard Beach, one of most racist parts of NY.
It was one of those moments where people act surprised because there is still... wait for it... racism in New York!
Twenty years ago another negro got murked in Howard Beach and it was a much bigger deal.

The prosecutors (or the offense, as I like to say) allege that Nicholas Minucci called Moore a nigger as he chased him and beat his ass.

The defense claims that Minucci said "What up nigga?" to Moore as he approached, to which Moore replied "What up?"
Then Minucci beat his ass after he was attacked.

As far as this whole story goes, Minucci's defense strategy is laughable, because I don't think a white person has ever had to defend themselves from a black person in Howard Beach nor has any black person, post-1970, replied to a white person's "What up nigga?" with a friendly "What up?"

Negroes know better.
Plus Minucci is a racist ass name. That sounds like one of A.J. Soprano's friends.


I pray to the God of racism for a Chinese kid to say "What up nigga?" to me.
Truly.


Recently there was a Internet nerd debate about the racism of an indie artist who doesn't like rap.
He said rap has "more vicious caricatures of African-Americans than they had in the 19th century."
Is he wrong?

And he also said that the song "Zip-a-Dee-Doo-Dah" from the super racist Disney movie, "Song of the South" was catchy.
Is it not?

During this whole debate some said this issue raises "the dangerous and stupid notion that one's taste in music can be interrogated for signs of racist intent the same way a university's admissions process can: If the number of black artists in your iPod falls too far below 12.5 percent of the total, then you are violating someone's civil rights."

Although it's clear this guy was a victim of the P.C. police, the question remains, does the word nigga coming from a white man who like totally digs hip-hop dude and then cracks your skull, better than nigga coming from an indie-loving, Pitchfork-reading cracka?


While writing this "In the Heat of the Night" and "Remember The Titans"(soo inaccurate) were playing; two movies whose driving conflict comes solely from 1960's racism and both had plenty of niggers, coons and general racism to go around.

So how did that kind of obvious understanding of racist language and intention devolve into a sort of pan-niggaism where people are unable to to identify the meaning of the word?

The defense's argument rests on the assumption that rap has changed the context of the word to the point where tossing out a "nigga" before a beating does not constitute a hate crime.

When one of the most white-friendly artists, Kangay West, had 2005's biggest hit with the sing-along friendly chorus of,

"Now I ain't saying she a gold digger
But she ain't fucking with no broke niggas."

What is Amber supposed to sing in her Audi after she buys Kangay's unedited album from Best Buy for $9.99 on her way to the Hamptons?

Please believe that she ain't fucking with broke niggas, not broke... broke as the radio would have you believe.
Posted by Unknown at 10:33 PM