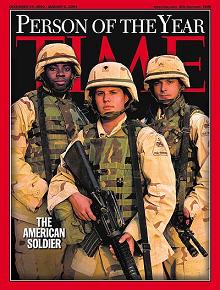 I probably forgot about this story with all the other pleasantries coming out of Iraq, but it is pretty much confirmed that American soldiers are snapping and intentionally killing civilians in Iraq.

A group of marines lost it and killed about two dozen villagers after one of their men was taken out by a roadside bomb.
In a place where animals carcasses have IEDs planted in them, there isn't always a clearly labeled terrorist to take your anger out on.
So I guess they found other ways to relieve the anger.

Initially there was an attempt to whitewash the event and claim that the marines were attacked first, but conflicting reports messed that plan up. If the military covers up the friendly fire deaths of American soldiers, of course they are going to cover up Iraqi civilian deaths.

I don't need to be a soldier to know that patrolling Iraq is hard (you can watch Baghdad ER to learn that) and that when trash cans and dead dogs start blowing up around you on your third tour or Iraq, you are probably going to want to shoot something.
And it's probably even more frustrating when one of those explosions kill your friend.
But the really reason all of this is happening is because soldiers weren't meant to police cities and countries, they are meant to invade and bounce.

These soldiers deserve whatever they get, but they didn't take a detour on vacation to end up in this situation.
But just like Abu Gharib it's easier to pick off the bottom of the food chain than look at the top and see what is really going on.

Time Magazine, for dropping the original dime on this story back in March and pushing it into a full investigation, you are the Snitch of the Week.
Posted by Unknown at 1:00 AM

Labels: Politix, Snitch of the Week, Terrorism Is Bad