Israel and Obama: The Awkward Dance

I'm still feeling this story out as much as Obama and Israel are feeling each other out.

However, we have the first shot fired as Charles Freeman withdrew his name from an intelligence position.

Because of the Jews! (NYT article, the comments are better than the article)

Alternet.org's version is the best I think. (Yea, I read about half a dozen takes on this story. So what?)

I still can't act like I'm well versed in this particular situation, but it seems very incredible that Charles Freeman was nominated to any administration position considering his frankness when discussing Israel.

"Israel is driving itself toward a cliff, and it is irresponsible not to question Israeli policy and to decide what is best for the American people."

Wow. Common sense can be truly radical. How dare we, as Americans, wonder what actions will create the best long-term results for... America and not Israel. The myopia is blinding. As one commenter said,

"Perhaps the (NYT) article could have pointed out that Mr. Rosen, whose blog initiated the attack on Freeman, is currently indicted on espionage charges and due to stand trial. Steve Rosen along with Keith Weissman are charged with providing Israel with classified US documents.

And Chuck Schumer is definitely on my shitlist.

But when U.S. Representative Israel (I swear that's a real Jewish congressman in NY) calls up Rahm Emanuel along with the Zionist Organization of America (real group) and says get this guy out of the running, America has a bit of a problem.

I would like to start the Black Power/Africa First/ Ali Boom Ba Yay! Lobby or maybe the Trini to the Bone Lobby group and see how patriotic it is for the U.S. to support my country's interests over their own. Or what calls Senator Schumer make on my behalf.
Posted by Unknown at 11:48 PM 1 comments

What if Tyler Perry Directed The Watchmen?

I often have this nightmare... 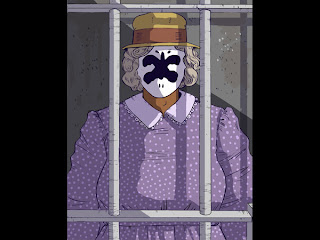 Snitch of the Month

Is a lot more feasible than Snitch of the Week, so I'll be dropping monthly Snitch awards and an honorable mention or two.

As always, feel free to nominate the Snitches who deserve the props.
Posted by Unknown at 2:29 PM 1 comments

My favorite white man in the world, David Simon (creator of The Wire and a ton of other classic groundbreaking television shows) decided that people didn't pay enough attention to Season 5 of The Wire and went back into reporting.

Or maybe he smelled bullshit on a police shooting and decided to embarrass at least three institutions at the same time.


(Did I mention that I also took a train with DS (as I call him) from Columbia University to Penn Station?
Yea, I'm cool like that.)
He touches on so many of themes (bloated police bureaucracy, community/police disconnect, failure of the media) that made The Wire so powerful and vital.

Clearly the media is at fault here. I'm far from an expert on this but the most immediate problem is that the profit margin expectations are too high on newspapers.

They need to be privatized by angel investors who can accept a 2% return or just be happy with breaking even.
This is a much better approach than constant staff cuts to reduce costs to increase profits and pump the stock price.

Otherwise these important and even the not so seemingly important stories will continue to slip through the cracks. At least we have TMZ to do our serious reporting.

The Year Two Thousand... and Nineteen

Below is a Microsoft nerd fest of what they expect to happen in the next 10 years.

More than anything I am a technology lover and advocate. So watching videos like the above give me a little bit of an orgasm, regardless of whether Microsoft is the company that will usher in this new wave of tech or not.

Thinking about the next 10 years of tech and where we have come from since 1999 and the scritch scratch of AOL dial-up and their ubiquitous installation discs is pretty overwhelming.

We already live in an age where computers can access detailed 3D imagery of the entire earth and ocean, replace your television via the internet and help you stalk your exes from as far back as elementary school.

What will the iPhone be like in 10 years?
What will video game tech or even computing in general be capable of?

Or will we be fighting Chinese robot police for scraps of food in our post economic collapse in a sort of I Am Legend/Mad Max future dystopia?

But then things like reality have to go and fuck shit up for me. Who will really get to use these technologies? Will they improve society or just make life easier for those whose lives are already pretty easy?

I mean, what's the point of an awesome touch screen medical diagnosis device when over 50 million people in the country will be uninsured by 2019.

Which leads me to this NYT article about upper class white people who are now "poor."

The article discusses people who had  6 digit salary careers who now have $12/hr jobs.

These articles are pretty amusing to me. I don't know if it's wrong or not but it's hard for me to feel sorry for these people. Granted, these people aren't necessarily RICH or the most deserving targets of my ire but the tone of the article does nothing for me.  Is it more saddening or worthy of sympathy for a person to lose their $100K job and health insurance than a person who never had health care in their life.

And if you read the NYT comments, many people are saying "Join the fucking club."

If you like that article then peep this video about "poor" white people in South Africa and please let me know if you shook your head throughout.

Maybe it's the Obama effect or maybe its the fact the white people are becoming more displaced as minority population growth outpaces white pop. growth or maybe our Depression 2.0 will show a large part of the mid to upper crust what life is like for the rest.

For whatever it's you can expect to hear a lot more of these stories.