It's not sad if you shoot first... 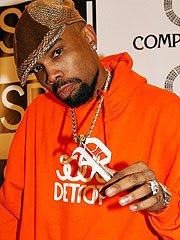 (No shout-outs at rap concerts for him please)

The disease of hip-hop at nighttime got another negro shot this week.

The newest victim was famous this time and happened to Eminem's weed-carrier, Proof, of D-12 fame.

The knee-jerk "R.I.P. fallen soldier" amongst other bullshit hip-hop tributes had already started when the evidence came out showing that he fired first and was shot as a result of his own ignorance.


Who doesn't celebrate the relief from their medical conditions at Detroit nightclubs?
"Any cancer patients in the house?!"
"If ya got both kidneys, put 2 fingas in the air!"
I hear it all the time.

The man's cousin, who has turned himself in, then proceeded to light Proof's shit up.

No, you stupid motherfucker, we can stop the violence.
Instead of gun-butting and shooting someone over an argument involving a pool game, you can maybe try not to act like a stereotypical irascible rapper and realize that if you pull out your gun another person will probably pull out their gun.

Maybe he could have thought of his kids before he decided to act out "Gimme the Loot."
Why is a 32 year-old man with 5 children at an afterhours nightclub in Detroit pistol whipping people?
Clubs close at 2 AM in Detroit and the shit went down at 4:30. Nothing good happens at after-hours spots.

And to add a drop of irony to the situation, Eminem's 2004 video "Toy Soldiers" about ending rap beefs, showed Eminem attending Proof's mock funeral.
Considering that was the only good song off of that horrible album, maybe now Eminem will have something to rhyme about again.

Some of the other recordings inducted this year are President Coolidge's inauguration, the first trans-Atlantic telephone conversation, Jimi Hendrix's "Are You Experienced," Gil Scott-Heron's "The Revolution Will Not Be Televised," and Stevie Wonder's "Songs on the key of Life."

Not bad company at all.

And no one from Sonic Youth shot anyone either.
Posted by Unknown at 12:37 PM